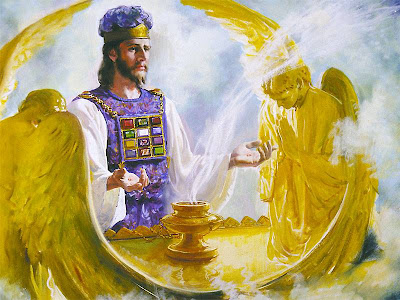 But Jesus does not simply give a two-word answer. Jesus has more to say. “I am and all of you will see the Son of Man seated at the right hand of the Power and coming with the clouds of heaven.” Jesus not only answered Caiaphas, but went a whole lot further in His declaration.

First, Jesus seems to draw an allusion from Psalm 110:1-2. For Him to be seated at the right hand of the Power is to say that He will sit at the right hand of God. This means that He has authority, rule, and power of God. This is the point of Psalm 110:1-2. “The Lord said to my Lord: ‘Sit at my right hand until I make your enemies a footstool for your feet.’ The Lord will extend your mighty scepter from Zion ; you will rule in the midst of your enemies.”

Jesus further establishes His Messianic claim by alluding to Daniel 7:13-14. “In my vision at night I looked, and there before me was one like a son of man, coming with the clouds of heaven. He approached the Ancient of Days and was led into his presence. He was given authority, glory and sovereign power; all peoples nations and men of every language worshiped him. His dominion is an everlasting dominion that will not pass away, and his kingdom is one that will never be destroyed.”

The Son of Man is not simply a Messianic reference, but carries the power of the office. He is God and has rule and authority from God.

TEARING OF THE ROBE
The High Priest was consecrated by God via the anointing oil, and if his sacred garments became torn (among other things), he was considered to be defiled. (Leviticus 21:10-12) To prevent this from taking place, the ephod (which the High Priest wore around his neck), had a collar made with mail (tiny bits of metal), so that it wouldn’t fray and tear (Exodus 28: 31-32 and Exodus 39: 22-23):
“You shall make the robe of the ephod all of blue. There shall be an opening for his head in the middle of it. It shall have a woven binding all around its opening, like the opening in a coat of mail, so that it does not tear.” (emphasis mine)

When Caiaphas intentionally ripped his priestly garments, he should have been laid hold of by the Sanhedrin; dragged out of the Temple court to the city gates; and there be put to a slow and very agonizing death by stoning! In fact, not only was Caiaphas worthy of the death penalty, but through his unlawful actions, he actually brought down a curse upon the entire nation of Israel (Leviticus 10: 6-7):
"Then Moses said to Aaron and his sons Eleazar and Ithamar, “Do not show grief by leaving your hair uncombed or by tearing your clothes. If you do, you will die, and the Lord’s anger will strike the whole community of Israel. However, the rest of the Israelites, your relatives, may mourn because of the Lord’s fiery destruction of Nadab and Abihu. But you must not leave the entrance of the Tabernacle or you will die, for you have been anointed with the Lord’s anointing oil.” So they did as Moses commanded."

In the tearing of his priestly garments - before the Lord Jesus Christ – he was prophetically signifying that the old order of the priesthood was about to change! For according to the Old Covenant Law, the priesthood was to be selected out from the tribe of Levi. But now our new High Priest, Jesus Christ, is not descended from the tribe of Levi, but rather from the tribe of Judah, as we read in Hebrews 7: 11, 14, where Paul writes:
“If perfection could have been attained through the Levitical priesthood – and indeed the Law given to the people established that priesthood – why was there still need for another priest to come, one in the order of Melchizedek, and not in the order of Aaron? For it is clear that our Lord descended from Judah, and in regard to that tribe Moses said nothing about priests.”

By the tearing of his ephod – in reaction to Christ declaring himself to be the promised Messiah – Caiaphas was publicly declaring before the entire Sanhedrin - “This One standing here before me is the new and living way! To Him alone belongs the royal priesthood. My time is done. It is finished!”

The imperfect Mosaic Law, by which not one single person in all of history had ever been made righteous before God (not even Moses, who gave it), was about to pass away!

Surprisingly, many Christians don’t realize that the Mosaic Law was never intended to last forever. God had only designed it to last for a very short period of time (1,400 years); under very limited circumstances (i.e. given only to the nation of Israel); until the One whom the Bible refers to as ’THE SEED‘ (Jesus Christ), finally came (Galatians 3: 19, 21-24):
"What, then, was the purpose of the Law? It was added because of transgressions, until THE SEED, to whom the promise referred, had come. Is the law therefore opposed to the promises of God? Absolutely not! For if a law had been given that could impart life, then righteousness would certainly have come from the Law. But scripture has locked up everything under the control of sin, so that what was promised, being given through faith in Jesus Christ, might be given to those who believe. Before the coming of this faith, we were held in custody under the law – locked up – until the faith that was to come would be revealed. So the law was put in charge of us until Christ came, that we might be justified by faith.”

Paul tells his listeners twice … first in verse 19, and then again in verses 23-24, that the Mosaic Law was only given until the arrival of the Messiah (Jesus Christ), by whom we would be made righteous and justified, not by works of the Law, but through faith in His finished work at the cross, alone!

Yet again, in Hebrews 7: 12-13, 28-29, Paul tells us that since the order of the priesthood has changed from the order of Aaron (tribe of Levi), to the order of Melchizedek (based on the tribe of Judah), that the Law must also be changed. In fact, he also states that not just for this reason alone must the Law be changed (removed), but because it is useless!
“For when there is a change of the priesthood, there must also be a change of the law. He [Jesus Christ] of whom these things are said belonged to a different tribe [Judah], and no one from that tribe has ever served at the altar. The former regulation is set aside, because it was weak and useless. For the law made nothing perfect, and a better hope is introduced, by which we draw near to God.”

We now have a far greater, and more reliable hope, than Israel ever had while under the impossible demands of the Mosaic Law.

For you see, Jesus was bound, that we might be free!

Jesus was rejected, that we might then be accepted by God the Father!

He is our new and better High Priest, whose garments were not torn. Let me prove it to you, by turning to John 19: 23-24, where Jesus is hanging naked on the cross, just moments away from death:
“When the soldiers had crucified Jesus, they took his clothes, dividing them into four shares, one for each of them, with the tunic remaining. This garment was seamless, woven in one piece from top to bottom. “Let’s not tear it”, they said one to another. “Let’s decide by lot who will get it.” This happened that the scripture might be fulfilled, which said: ‘They divided my garments among them, and cast lots for my clothing.’ So this is what the soldiers did."

Note that Caiaphas (prophetically), announced that his role as high priest, was passing away, while the Roman soldiers – through their refusal to tear the tunic – were (prophetically) validating that Jesus Christ was indeed the new and better, eternal High Priest!

Finally, we see yet another confirmation that Jesus Christ is our new and better, eternal High Priest, just as He took his last breath on the cross, and died (Matthew 27: 50-52).
“And when Jesus had cried out again with a loud voice, he gave up his spirit. At that moment the curtain of the temple was torn in two, from top to bottom. The earth shook, and the rocks split. The tombs broke open, and the bodies of many holy people who had died were raised to life.”

When Jesus cried: 'IT IS FINISHED!' and died, the veil of the Temple was torn in two from top to bottom! The veil was in place to separate man from God, who dwelt in the Holy of Holies (the most sacred part of the Temple).

The veil represented the barrier standing between God and all of mankind, namely sin. It was precisely because of sin, that man could not enter into the presence of God, and even the high priest could only do so one time per year (the Feast of Atonement), and only under certain conditions.

THEREFORE:
First we have Caiaphas tearing his priestly garments, prophetically stating that his time was done, now that the new and better High Priest - the new and living way - stood before him, in the person of Jesus Christ.

Secondly, there were the Roman soldiers, who, after they crucified Christ, prophetically validated his role as our eternal High Priest, by their refusal to tear his garments.

Finally, we now have God the Father, giving his seal of approval to Jesus, by tearing the veil of the Temple – from top to bottom – effectively saying: ‘It indeed has been finished, and that which separated God from mankind (sin), has been permanently removed. Now the entire world, and all of its people may freely come into my presence, without fear of condemnation and judgment.’

HALLELUJAH! PRAISE JESUS!
-----excerpts from westpalmbeachchurchofchrist.com and evaggelion.org
Posted by sandrajune at 8:17 AM No comments: