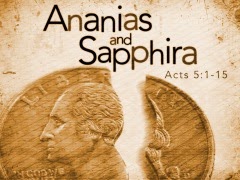 This scene in the New Testament has aroused a great debate: were Ananias and Sapphira actually born-again, saved believers in Jesus Christ? The bottom-line is that scripture does not tell us. It does not refer to them as "disciples" or "beloved" or any other description that it does for so many others indicating their spiritual status. And we need to remember that God's correction upon believers over their sin is corrective, not punitive. All His wrath was poured out upon Jesus Christ on the cross for a believer's sin. But that stated, here are five things that this scene can teach us:

"The story of Ananias and Sapphira in Acts 5 lets us know that despite the explosion of growth in the early church, they had moments of weakness, even gross sin. I believe that their deaths serve as a warning to the Church today, and that God has a lot to teach us—if we are willing to hear:
1. In the church, there are two kinds of people, and it’s nearly impossible to distinguish them from the outside.
On the outside, Ananias and Sapphira look just like another church member named Barnabas (introduced in Acts 4). Barnabas had just sold his property and brought the money to the apostles, and to the casual observer, Ananias and Sapphira were doing the same thing.
But deep in their heart lingered a love of money and a desire for people’s praise. So they conspired together to present a portion of their money while passing it off as the entire amount. This is worlds apart from the attitude of Barnabas, but looks very similar.
We may be able to get away with this sort of duplicity for a while, but if someone looks closely, the lies are there, threatening to undo everything. And even if they don’t . . .
2. We cannot hide from God.
It may be difficult for us to distinguish between a truly repentant heart and a seasoned faker, but nothing is hidden from God. The Holy Spirit knows our thoughts as if they were being played through a loudspeaker or being displayed on a screen.
That is why despite fooling everyone else, Ananias and Sapphira were still found out. There are no locked doors or hidden closets for the Holy Spirit.
A day will come when every secret will be proclaimed from the housetops (Matt 10:27). Do we really believe this? Are we ready for it? Ananias and Sapphira had known this . . . but they forgot it. They became so consumed with the praise of others that they forgot the only One whose praise really matters.
I can’t see inside of your heart to discern whether you’re a Barnabas or an Ananias. But the secrets of your heart are not secrets to God. When you proclaim with your lips that “Jesus is Lord” and live as if his law doesn’t matter, don’t deceive yourselves into thinking that you’ve successfully tricked God.
3. The closer we are to grace, the greater the offense of sin.
Not everyone who lies gets struck down immediately for their sin. So why did Ananias and Sapphira? A couple of reasons:
First, their deaths—like much in Acts—serve as a sign. God takes something that is true in the kingdom of God and puts it on physical display. We see this most often through the healing miracles, but it is equally true of this judgment.
God doesn’t do this with everyone who lies to the Holy Spirit today. But that should not cover up the fact that this death is a picture of how God feels about it. It is a glimpse of the future judgment for all who share in the heart of Ananias and Sapphira.
Second, Ananias and Sapphira had seen the activity of the Holy Spirit so closely that the seriousness of the sin increased. Think of it like the temple: the closer you are to the holy place, the more significant is every blemish.
These people had seen the mercy of God firsthand. Ananias’ name, in fact, means, “God is merciful.” They had likely been witness to the death of Christ itself! And yet despite being recipients of such great grace, they spurned it for the praise of men. Do not take holy things lightly!
4. Fear is a part of worship.
Unsurprisingly, these dramatic deaths caused a great deal of fear (Acts 5:5, 11). But we may be shocked to see that even in light of this, “more and more people believed in the Lord” (Acts 5:14). Fear is an integral part of worship.
For those of us familiar with the idea of an infinitely loving God, this is a jarring realization. But God’s love only makes sense when we know the magnificence of his glory and the might of his power. That is why John Newton wrote, “Tis grace that taught my heart to fear.” As the fear of God increases, so does the sense of his love, because we understand more fully what we have been saved from.
My favorite definition of the fear of God is awe mixed with intimacy. We are invited into the closest possible relationship with God, but this intimacy must never overshadow the majesty of who God is.
5. Sin is a deadly serious matter to God.
If we’re honest, many of us find God’s actions here offensive—but that merely reveals our ignorance of our sin and God’s holiness. We shouldn’t ask the question, “Why did they die?” Instead we should wonder, “Why do we remain alive?”
Yes, God is patient with us and slow to anger. But as R.C. Sproul says, we forget that God’s patience is designed to lead us to repentance, not to become bolder in our sin. If Jesus really went through the tormenting hell of the cross to redeem us, and we neglect that in pursuit of our sin, what will it be like to stand before God? “How shall we escape if we neglect such a great salvation?” (Hebrews 2:3)"  --J. D. Grear
Posted by sandrajune at 9:04 AM